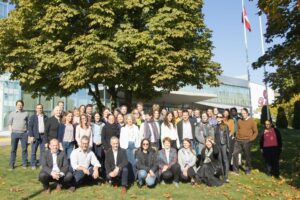 The NEXOGENESIS project partners have met for their annual meeting in Riga, Latvia last 26th to 28th of September 2022. It was the occasion for all the project partners to visit where the Lielupe river basin Case Study is being implemented. It also was the opportunity for partners to reflect on the various project’s tasks and progress carried out during this first year.

On the first day, the consortium partners started intensive discussions on core developments of the project, including progress, issues, needs and what will be done in the next 6 months, on the co-creation of WEFE nexus governance and water policy streamline, Biophysical-Human Modelling, Nexus Systems Thinking and Integration, Nexus Self-Learning Assessment Engine development and Case Study coordination. Then, followed a workshop on exploitation and sustainability lead by Dr. Svetlana Klessova, G.A.C Group. It allowed partners to start discussions regarding the scale up of the NEXOGENESIS Platform and the NEXOGENESIS user-validated policy packages to potential end-users and customers.

On the second day, Stefania Munaretto, KWR and Maria Papadopoulou, NTUA, presented the Policy Packages, their design and integration into models with an emphasis on the Nestos River Basin Case Study. Then, partners continued their discussions with presentations on how to promote the NEXOGENESIS project to the wider audience and its management.

The first session on Socioeconomic Modelling followed, including an explanation of how it works, data outputs, expectation of management and a Q&A lead by Fondazione Universita CA Foscari Venezia (CAF). After a well-deserved lunch break, two parallel breakout sessions were organised. The first one on the WEFE Nexus Footprint and Indicators including discussions on its development and applications to the Nexus and the transboundary issues that may occur, was led by Jones and Wagener LTD (JAWS). The second breakout session on the user interface design of the NEXOGENESIS Platform was led by Fondacio Eurecat (EUT). The results of the breakout sessions were given on a plenary session. Finally, to finish the day, a nice dinner was organized to continue technical and non-technical discussions.

On the third and last day, two other parallel breakout sessions were organized. The first one on conceptual mapping with Case Studies led by jointly University of Thessaly (UTH) and IHE Delft Institute for Water Education (IHE). On the second one, partners worked on Stakeholder engagement and evaluation, as well as Case Studies experiences and lesson learned. This session was led by Uppsala Universitet (UU) and National Technical University of Athens (NTUA). The third one consisted of discussion about the complexity of the science tools and conceptual modelling, and on the sensitivity/uncertainty analysis (Monte Carlo Stochastic analysis) led by UTH and IHE. The fourth and last one directed by KWR Water B.V (KWR), Université de Tours (UNT) and Helmholtz-Zentrum Fur Umweltforschung GMBH (UFZ), involved a co-creation atelier about policy packages project partners. The results of the breakout sessions were given on a plenary session. The 3-days annual meeting for NEXOGENESIS ended with a brief wrap up session.

Many thanks to the organizers from Baltijas Vides Forums (BEF) for this great event !

Stay tuned for more information on the latest developments !